The science. Not the rising sea levels.

When North Carolina got bad news about what its coast could look like thanks to climate change, it chose to ignore it.

In 2012, the state, now in the path of Hurricane Florence, reacted to a prediction by its Coastal Resources Commission sea levels could rise by 39″ over the next century by passing a law that banned policies based on such forecasts.

The legislation drew ridicule, including a mocking segment by comedian Stephen Colbert, who said: “If your science gives you a result you don’t like, pass a law saying the result is illegal. Problem solved.”

North Carolina has a long, low-lying coastline and is considered one of the US areas most vulnerable to rising sea levels.

But dire predictions alarmed coastal developers and their allies, who said they did not believe the rise in sea level would be as bad as the worst models predicted and said such forecasts could unnecessarily hurt property values and drive up insurance costs.

As a result, the state’s official policy, rather than adapting to the worst potential effects of climate change, has been to assume it simply won’t be that bad. Instead of forecasts, it has mandated predictions based on historical data on sea level rise.

“The science panel used one model, the most extreme in the world,” Pat McElraft, the sponsor of the 2012 bill, said at the time. “They need to use some science we trust when we start making laws in North Carolina that affect property values on the coast.”

The billionaire, who called global warming a hoax, warns of its dire effects in his company’s application to build a sea wall.

“It’s diabolical,” said South Carolina Republican Rep. Bob Inglis, an advocate of solutions to climate change. “Donald Trump is working to ensure his at-risk properties and his company is trying to figure out how to deal with sea level rise.

Meanwhile, he’s saying things to audiences he must know are not true. You may have a soft place in your heart for people who are honestly ignorant, but people who are intentionally deceitful, that’s a different thing.”

Willful ignorance: is a state and practice of ignoring any sensory input that appears to contradict one’s inner model of reality. At heart, it is almost certainly driven by confirmation bias.

In practice, the word “ignorance” has often come to imply “willful ignorance.” Yet, “willful ignorance” differs from ordinary “ignorance“ — when someone is simply unaware of something — in that willfully ignorant people are fully aware of facts, resources, and sources, but refuse to acknowledge them. Therefore, “ignorance” shouldn’t really be a pejorative, but intentional willful ignorance is an entirely different matter.

Willful ignorance is sometimes referred to as tactical stupidity.

Depending on the nature and strength of an individual’s pre-existing beliefs, willful ignorance can manifest itself in different ways. The practice can entail completely disregarding established facts, evidence, and/or reasonable opinions if these fail to meet one’s expectations.

Often the willfully ignorant will make excuses, claiming a source is unreliable, suggesting an experiment was flawed, or asserting an opinion is biased. More often than not, this is circular reasoning:

“I cannot agree with that source because it is untrustworthy because it disagrees with me.”

Willful ignorance can involve outright refusal to read, hear or study, in any way, anything that does not conform to the willfully ignorant person’s worldview, including outright censorship of the material from others.

The legislation was passed by the Republican-controlled state legislature and allowed to become law by the then governor Bev Perdue, a Democrat who neither signed nor vetoed the bill. The law required the coastal resources commission to put out another study in 2015, looking at expected sea level rise.

That report looked only 30 years ahead, rather than a century. It found the rise in sea level during that time was likely to be roughly 6-8″with higher increases possible in parts of the Outer Banks.

Outside studies offer more dire warnings. A report last year by the Union of Concerned Scientists states 13 North Carolina communities are likely to be “chronically inundated” with seawater by 2035. 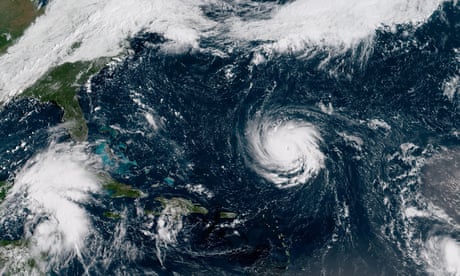 Florence path tracker: where is the hurricane heading?

Orrin Pilkey, a retired Duke University coastal geologist, wrote in a recent op-ed in the News & Observer the state failed to take the steps communities in Virginia and New Jersey have taken to prepare for rising sea levels.

“Instead, coastal development flourishes as more beachfront buildings, highways, and bridges are built to ease access to our beautiful beaches,” he wrote. “Currently, the unspoken plan is to wait until the situation is catastrophic and then respond.”

How power profits from disaster: After a crisis, private contractors move in and suck up funding for work done badly, if at all – then those billions get cut from government budgets.

3 thoughts on “North Carolina didn’t like the science on sea levels, so they passed a law against it.”