It’s ah… Echochamber Monday because we forgot to do it Friday. So we don’t become frogs in a well, let’s see how the other half lives by intentionally reading some stuff we wouldn’t ordinarily read. Everyone is talking about the wall and the accompanying government shutdown these days. What are they saying?

Well, Donald Trump says, “Never, ever give up. Don’t give up. Don’t allow it to happen. If there’s a concrete wall in front of you, go through it, go over it, go around it. But get to the other side of that wall.”

Commencement speech at Wagner College with Donald Trump telling the immigrants ahhhh…. graduates to pole vault over and dig tunnels under his wall. Ahem…

In case you are wondering, All Eight of Trump’s Wall Prototypes Fail Basic Penetration Test

Remember facts?!? We don’t need no stinking facts! What we need is a guy missing three limbs to use as a poster child (with his kids) to raise money for raising tour wall!

The Kolfage family of grifters

Lookey here, he’s got $20 million from the rubes so far!

What? It’s a scam? Figures.

Well then, what are the celebrities saying? They tell us what to do and what we need to know. Celebrities think for us, that way, we just follow their examples to, you know, be trendy. To fit in. Here are two now… just join a team. Team Kathy or Team Kristy

Kathy Griffin probably didn’t wake up on Saturday thinking she was going to get into it with Buffy Summers, but here we are. Griffin ended up in an interesting exchange with actress Kristy Swanson on Twitter over Donald Trump’s border wall.

Kristy Swanson is Buffy the Vampire Slayer, and she doesn’t take kindly to slaying the Donald in effigy.

It started when Griffin tweeted the president, saying his wall “isn’t going to do a damn thing” about tunnels. Swanson, who played Buffy in the 1992 film Buffy the Vampire Slayer, replied to the comedian, saying “we know about the tunnels” because her nephew “was blown up by the cartel because of their tunnels, he died 3 times.”

We know about the tunnels @kathygriffin, my nephew ARMY was blown up by the cartel because of their tunnels, he died 3 times. We need a secure WALL, technology, boots, drones & more, we need it ALL. And one thing we really don’t need is your idiotic input about the border…

The statement was a bit of a headscratcher, which lead to Swanson’s declaration being mocked on social media:

My Nephew, COAST GUARD, was blown up by Garfield because of the lasagna. He died 6 times. We need a more secure KENNEL, scratching posts, and litter box.

Was he… a vampire?

Hi, multiple death experiencer here. How many deaths before you can’t come back any more? I’m at five, currently.

Griffin responded to Swanson, tweeting, “I’m sorry to hear about the death of your nephew who somehow managed to die three times.”

Thanks @KristySwansonXO, I’m sorry to hear about the death of your nephew who somehow managed to die three times. And thanks for telling me you don’t need my input, look up the 1st amendment, bitch. https://t.co/7GXkBFhRQC

Swanson went on to tweet an article about how Griffin is a patriotic star who shared her talents with the troops, exclaiming she was “shocked” to see the comedian’s name on the list. Well, Griffin had a response to that too.

Why are you shocked @KristySwansonXO? My father was a World War II vet and I am so grateful for the sacrifice of our troops. Unlike Trump, I have visited and entertained the troops in multiple war zones. https://t.co/CnBjQ6Iq4Y

Swanson, who is a big supporter of President Trump, attempted to clarify her remark about the death of her nephew … but it was equally puzzling. She said “he did die 3 times” but “survived with 19 months of recovery.”

Actually I did not make anything up. In 2017 I was under the impression that Chris had lost a few of his men in the explosion. I found out later they were all injured, he was the worst, he did die 3 times and survived with 19 months of recovery. Would you like to talk to him? https://t.co/DW6QiCY0xF 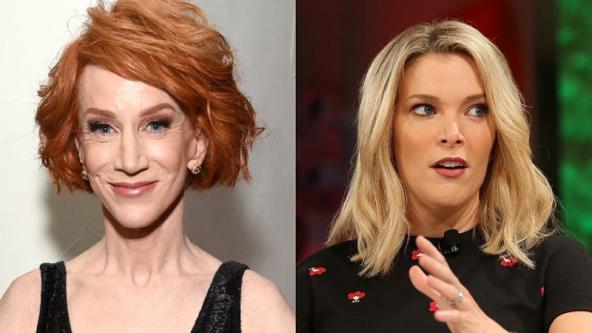