Super Sunday is the biggest promotion of capitalism in the world. But is there any room left for social conscience?

This year’s Super Bowl isn’t just an epic showdown between the two best football teams in the NFL, it’s a three-way bare-knuckle brawl between the perpetually dueling American values of competition, commerce and conscience. As usual, it looks like commerce will be the undisputed winner. This conflict in no way detracts from the thrill and joy of watching elite athletes in action. We can still admire the artistry of a fashionable outfit, even if it’s worn by a despicable person. But at some point we have to ask ourselves whether we want to continue to contribute to this dysfunction because it entertains us, or demand some accountability because we’re responsible adults.

This clash of conscience is one of the reasons why the NFL struggled to find performers for its halftime show, even though an appearance would mean being exposed to over a hundred million viewers in the United States alone. That can translate into a lot of money. Yet famous singers such as Cardi B, Jay Z, and Rihanna refused to perform out of solidarity with Colin Kaepernick, who has been blackballed for his non-violent, non-verbal message that there is racial inequality and injustice in America. Instead, they have Maroon 5, Big Boi, Travis Scott, and, to sing the national anthem, Gladys Knight. The backlash against the NFL and these performers resulted in the league cancelling the traditional pre-game news conference for the half-time show performers, with the excuse, “As it is about music, the artists will let their show do the talking as they prepare to take the stage this Sunday.” 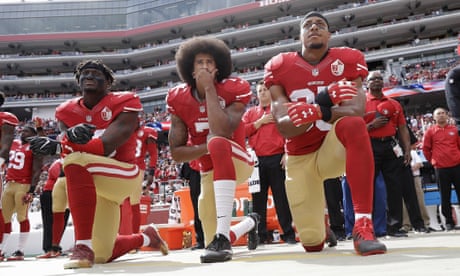 Super Bowl: how the NFL’s biggest game became a cultural and political battlefield

Clearly, it isn’t just “about the music”, but also about what the Super Bowl represents. Our ethics aren’t drowned out by Moves Like Jagger as if we were kittens distracted by a laser pointer. Given the increasing political divisiveness in the country, the game isn’t just a game, it’s a cultural symbol of what we stand for and what we turn our backs on. President Trump made football a much bigger political icon in 2017 when he told NFL owners they should fire or suspend any player who takes a knee because that’s disrespecting the flag. He saw no irony in the fact that his calling for the punishment of people who peacefully exercise their First Amendment rights was exactly why the Founders created the First Amendment. Since taking office, Trump has lied to the country over 8,000 times – an egregious disrespect of the flag, the Constitution, and the country. His daily crock of lies has slowed slightly since he got crock-blocked by Nancy Pelosi, but he is still the quarterback to the NFL’s anti-free speech blitz.

The NFL’s economic exploitation policies reflect Trump’s policies of tax-cutting for the rich, deregulating consumer and environmental safeguards, and taking the side of Saudi Crown Prince, who ordered the murder of American resident and journalist Jamal Khashoggi, by saying, “I’m not going to destroy the world economy and I’m not going to destroy the economy for our country by being foolish with Saudi Arabia.” Even though this statement of the financial consequences was false, this is the same fiscal philosophy that the NFL has foolishly embraced. They should just tweak the Mastercard slogan: “There are some things money can’t buy. We’re just not one of them.”

I’m certainly not going to knock commerce or capitalism. I’ve been paid well as a player and as a spokesperson for products. I want every athlete to get paid what they’re worth. For that to happen, tickets must be sold, products must be placed, and businesses must be touted. But just because we support commerce doesn’t mean we should sell-out our moral principles along with every can of Pepsi. There needs to be an ethical line that we aren’t willing to cross, a dollar amount we aren’t willing to accept.

But the Super Bowl has fetishized commercialism. The game is being played in the Mercedes-Benz Stadium. The popular multiplayer video game Fortnite will be offering Patriot and Rams uniforms. The Nike swoosh will be prominent on Patriots and Rams jerseys. The average NFL game takes three hours and 12 minutes, of which only 11 minutes is actual play. Plus more than 100 commercials. American adults will spend an average of $81.30 each on this year’s Super Bowl, for a total of $14.8bn. The commercials will be featured on news shows and will become their own show. It is the biggest promotion of capitalism in the world and I’m good with that. The game should be exciting and the commercials entertaining. But is there any room in all that commerce for social conscience? Is free speech only expressed in commercials?

I get a patriotic zeal whenever I see someone stand for principle, especially at a personal cost, because that’s a core moral we value as Americans. Sacrifice for what’s right. But when people do stand up, we often try to marginalize them and their message. We complain that protest has a time and place – and interfering with our entertainment is neither. Actually, that’s exactly the right time and place, whenever there’s a large gathering of diverse people. How does taking a knee affect one’s enjoyment of their eleven minutes of game and one hundred commercials? Is that touchdown any less exciting because we were reminded that maybe we need to do more to bring about social equality?

Colin Kaepernick’s lawyer, Mark Geragos, accused those who perform at the Super Bowl as crossing an “intellectual picket line” based on greed I don’t agree. Each person has to choose their time and place and method to express their beliefs and, while I think Colin Kaepernik is a national hero and I whole-heartedly support those artists who boycotted the show, I don’t condemn those who didn’t. Our condemnation should be leveled at those out-of-step owners who muzzle their players’ consciences. And if we really wanted to force change, we’d try to convince businesses not to advertise during the Super Bowl. If that happened, imagine how quickly NFL policy would change.

Undoubtedly, there will a Super Bowl commercial that advises us “to drink responsibly.” But will there be anything to encourage us to “think responsibly”?

One thought on “The Super Bowl is a showdown of America’s dueling values: commerce and conscience”