I don’t usually ride on the merry-go-round called “murder trials,” mainly because it’s all gawking re-runs after OJ and the White Bronco.

Or was OJ a re-run of Charles Manson Goes to Hollywood?

Helter Skelter. I am the Walrus. Or something. Who knows?

I Am the Walrus by The Beatles

Is it a re-run? Yet, today is Echochamber Friday. Which is the day we pop our heads out of the ground like Punxsutawney Phil and see just what the hell is going on in the world without getting WHACK-A-MOLED while we have a look ’round. At least, not too much whacking. And it was just Valentine’s Day yesterday, so let’s look at what’s making that buzzing sound going round my noggin, shall we?

I’ve been living under a bridge (no, not literally, I just try my damndest to not pay attention to what bloody drama is on tap at the local bar). And there she was… Michelle Carter. Is it just me, or are her eyebrows two caterpillars off for a bit of moonlight romance?

Is it a thing to talk about them? Her eyebrows. You know, how you’d like to see her eyebrows fight a duel to the death, swordplay, just like in The Princess Bride…

Seriously. Does she by chance have six fingers on her right hand? I don’t know if any of these jokes are old by now, the drama I must have missed with Michelle Carter. She seems to have talked her now X-boyfriend into committing suicide. With text messages.

Are they the same person? Or at least dating one another? Anyone seen both of them in the same room at the same time?

It appears Cara Delevigne is dating someone called Ashley instead.

Sad. Is this why Michelle seems to be crying in most of these pictures?

Because Cara loves another?

Gawd this is confusing!!! Am I hopeless? Do all of you know all of this already?

Ok, now that’s settled…. what did she do exactly? Michelle Carter. She texted him or something. Let’s see…

People want to know, why did she do it? Will she go to jail?

This person called Doctor Peter Breggin says the Prozac did it!!! He’s got a lot of stuff on this. Prozac is the Devil! Hmmmm…

What this trial needs is more aliens. Aliens, I tell you!

Calm down now. Take a Valium… a Valerian… a Prozac? or something…

Do you see now why I try so hard not to know what’s going on in the world? What people are talking about at the office water cooler and so on is bonkers. The world is off-the-reservation bonkers.

Here’s the article that started it all off for me this morning. The day after the St. Valentine’s Day Massacre. Probably old news by now, but it’s news to me. Thanks, CNN! Happy Echochamber Friday, folks!

I still don’t understand whether or not she’s really going to jail though… do you? Ask the Supreme Court. What the world needs now is more spectacle.

(CNN) A Massachusetts judge on Monday ordered Michelle Carter to start serving her sentence for persuading her boyfriend to kill himself in 2014.

Carter was convicted of involuntary manslaughter in June 2017 after a judge determined her texts to Conrad Roy III persuaded him to kill himself.

Bristol County Juvenile Court Judge Lawrence Moniz sentenced Carter to 15 months in jail in August 2017, but he allowed her to remain free while she appealed her conviction.

On Monday, deputies led Carter out of the Taunton, Massachusetts courtroom after Moniz granted the Commonwealth’s request to revoke the stay of her sentence.
The case raised free speech questions about whether a person should be held responsible through their words for someone else’s actions. 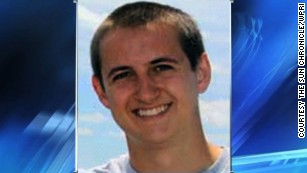 Conrad Roy III
Carter’s lawyers said they filed an emergency motion on Monday asking to extend the stay of her sentence while she appeals her conviction to the US Supreme Court.
“The Roy family is glad to have this aspect of the case over,” the family’s attorney, Eric S. Goldman, said in a statement. The family continues to pursue a civil claim for damages and hopes to establish a fund in their son’s name to educate people about suicide prevention.
Carter was 17 years old when Roy, 18, died in July 2014. The case hinged on text messages between the two in which Carter urged Roy to kill himself.
Prosecutors argued Carter listened over the phone as Roy suffocated from carbon monoxide inhalation in his pickup truck and failed to notify his parents or authorities when he died.
Carter’s lawyers argued her words encouraging Roy’s suicide, “however distasteful to this court, were protected speech.”
“Massachusetts would be the only state to uphold an involuntary manslaughter conviction where an absent defendant, with words alone, encouraged another person to commit suicide,” the attorneys said in their motion.
In the February 6 ruling, the state’s highest court ruled Carter “helped plan how, where, and when” Roy would kill himself. Carter “downplayed” Roy’s fears about how his death by suicide would affect his family, the judges said, and “repeatedly chastised him for his indecision.”
Carter’s attorney said earlier this month the ruling upholding the conviction was based on a narrative the evidence did not support.
“Today’s decision stretches the law to assign blame for a tragedy that was not a crime. It has very troubling implications, for free speech, due process, and the exercise of prosecutorial discretion, that should concern us all,” lawyer Daniel Marx said.