MIDLAND, Tex. — In a global collapse of oil prices five years ago, scores of American oil companies went bankrupt. But one field withstood the onslaught, and even thrived: the Permian Basin, straddling Texas and New Mexico.

A combination of technical innovation, aggressive investing and copious layers of oil-rich shale have transformed the Permian, once considered a worn-out patch, into the world’s second-most-productive oil field.

And this transformation has apparently inoculated Texas against its traditional economic enemy, the boom-and-bust cycle pegged to oil prices.

Even now, with prices still far below their peak, the Permian is bursting with production and exploration, and the biggest concern is how to create more capacity to get all that oil to market.

The shale-drilling frenzy in the Permian has enabled the United States not only to reduce crude-oil imports, but even to become a major exporter for the first time in half a century. Its bounty has also empowered the United States diplomatically, allowing it to impose sanctions on Iran and Venezuela without worrying much about increasing gasoline prices. Mounting Texas crude exports have pressured global oil prices down, and are a major reason that Russia and Saudi Arabia recently cut their own production to push oil prices back up.

“OPEC producers never thought the Permian could be the next star world producer,” said René Ortiz of Ecuador, a former secretary-general of the Organization of Petroleum Exporting Countries. “They never thought one field — one, and not a country — could actually be the monster field of their imaginations.”

Floorhands work on an drilling rig contracted to Shell in West Texas. Shell produces 145,000 barrels of oil a day in the Permian and projects it can increase production to 200,000 barrels a day by 2020. CreditTamir Kalifa for The New York Times 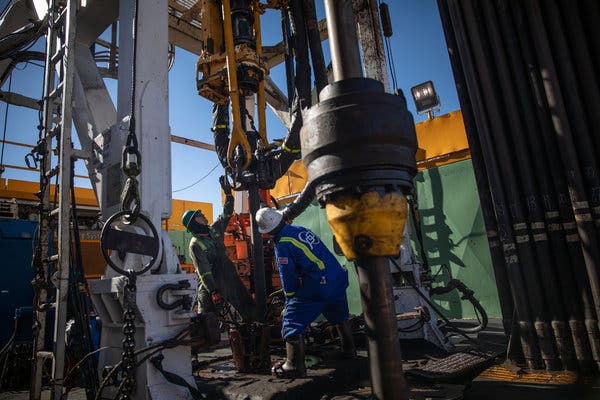 Ron Dube, Shell’s Permian operations manager. Shell has made clear that it aims to continue to expand in the Permian, where big companies have been snapping up smaller ones.CreditTamir Kalifa for The New York Times

Permian production has quadrupled over the last eight years, in contrast with the decline of most other established oil fields, for several reasons.

Companies found ways to lower exploration and production costs in tapping the Permian’s accommodating shale. New technologies for drilling and hydraulic fracturing helped bring the break-even price for the best wells from over $60 a barrel to as low as $33.

The Permian, as vast as South Dakota, is distinct from other shale fields because of its enormous size, the thickness of its multiple shale layers — some as fat as 1,000 feet — and its proximity to refineries on the Gulf of Mexico. Some shale fields produce too much natural gas, which is worth less than oil. Others have uneven layers of rock difficult to drill through. The Permian is rich in oil, and its shales are relatively easy to tap with today’s rigs.

Today the biggest risk, at least for producers, is that too much output might drive down prices too much and jeopardize their profitability. They could also prompt another round of aggressive actions from OPEC and its new ally, Russia.

“If U.S. production grows another two million barrels a day, we could take market share, but how long would OPEC allow that to happen?” said Scott D. Sheffield, chairman of Pioneer Natural Resources, a major Permian producer. “You could have another price war.”

That may be inevitable.

As many as 15 oil and gas pipelines serving the Permian are expected to be completed by the middle of 2020, potentially increasing exports from the Gulf of Mexico fourfold to eight million barrels a day after 2021, according to a recent Morningstar Commodities Research report.

A Shell central processing facility, where crude oil and natural gas is first processed. Exxon Mobil, Chevron, BP and Shell have been making big new investments in the Permian despite uncertainty about prices.CreditTamir Kalifa for The New York Times 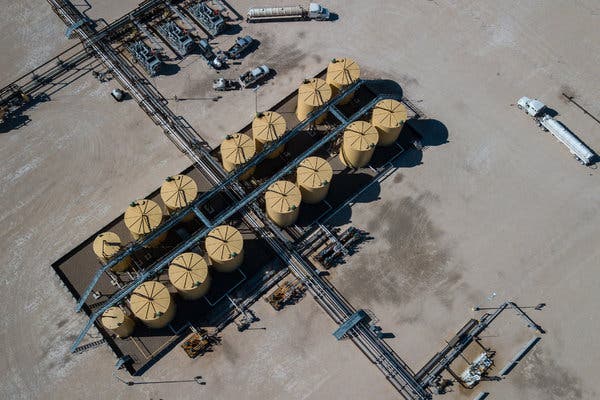 The Permian has been producing oil for a century, and provided much of the fuel the allies needed to win World War II. By 2008, it was a field in steep decline. Many major oil companies left, selling their land to smaller ones for a song.

But as the big companies looked for fields deep under oceans and in the Arctic, independents like Concho Resources and Parsley Energy pioneered shale drilling here, giving the field new life.

When oil prices took a dive, the upstarts experimented. They drilled longer wells and spaced them closer together in a zipper design to penetrate more shale. They tinkered with their formulas of chemicals and sands that they blast through the rocks, and they used computer technology to steer drill bits more accurately.

“OPEC changed the price of poker and the Permian had the best hand,” said Dale Redman, chief executive of ProPetro, one of the basin’s biggest fracking service companies. “They unleashed our creativity. They forced us to do things better and cheaper.”

ProPetro laid off 250 workers three years ago, after oil prices fell below $30 a barrel. But the company has since hired back those employees and added hundreds more, including 600 when they completed an acquisition on Jan. 1.

What makes the payroll additions all the more remarkable is that they come in the wake of the most recent downturn in oil prices — from $76 a barrel in early October to $42 in late December before recovering to more than $55 on Friday.

Despite the ups and downs, there are signs of expansion everywhere in the West Texas desert. Trucks line up at dawn for half a mile to pick up sand at local mines for the day’s fracking jobs. Competition for workers is so fierce that fast-food restaurants have blinking signs advertising their salaries. Anadarko Petroleum and Plains All American Pipeline are constructing new regional offices to add to those built in recent years for Chevron and Apache.

Pump jacks, a common sight throughout West Texas, are painted on a wall in downtown Midland.CreditTamir Kalifa for The New York Times 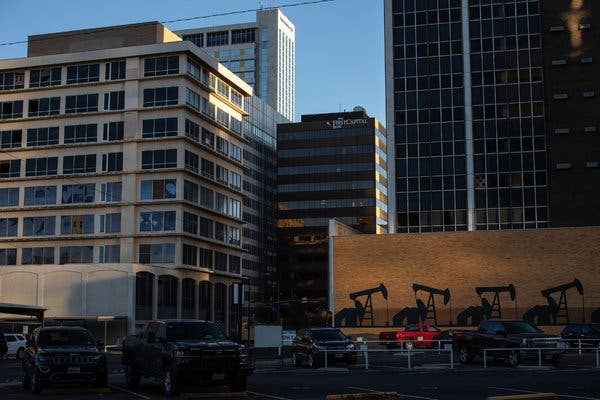 An exhibit at the Permian Basin Petroleum Museum in Midland. The region has produced oil for nearly a century.CreditTamir Kalifa for The New York Times 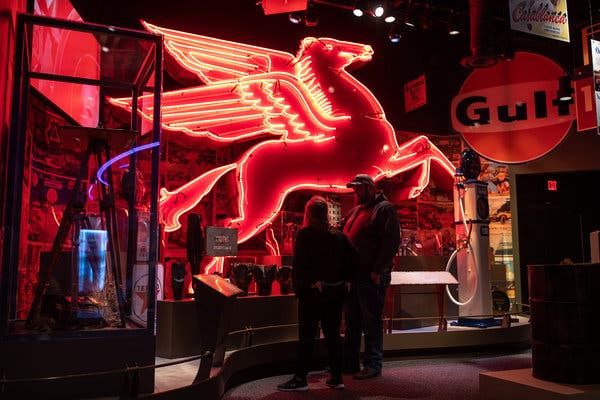 Motel rates and apartment rents have climbed so much that trailer parks are the only option for many workers. But few seem to mind.

“I will have work here forever,” said Mike Wilkinson, a truck driver who came from Dallas a year ago and moved into a trailer with his teenage daughter. “As hard a place as this is to look at, they are going to need guys like me to move equipment around here for years to come.”

Mike Wilkinson, a truck driver, outside his trailer in Midland. “I will have work here forever,” said Mr. Wilkinson, who moved from Dallas a year ago with his teenage daughter.CreditTamir Kalifa for The New York Times 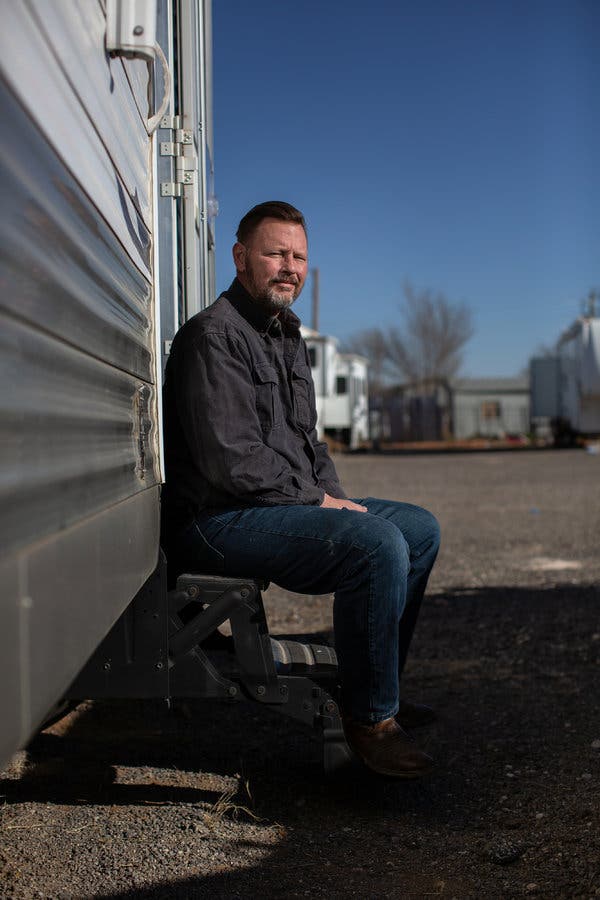 Mr. Wilkinson has reason for enthusiasm, given the giant new investments that Exxon Mobil, Chevron, BP and Shell have begun to make here despite all the price uncertainty.

With a major acquisition in New Mexico last year, Exxon Mobil became the most active driller in the basin, and projects that it will increase production fivefold by 2025. Also growing rapidly here, Chevron estimates that one in six of every barrels it produces globally will come from the Permian by 2021.

After regaining a foothold in the Permian last year, BP is expected to invest heavily, contributing to a total investment of more than $10 billion by the major oil companies here this year, according to IHS Markit, the energy consultant.

Royal Dutch Shell is just beginning to catch up, after buying acreage from Chesapeake seven years ago. It already has 1,300 wells that produce 145,000 barrels of oil a day and associated gas, a 200 percent increase since January 2017. The company projects it can increase production to 200,000 barrels a day by 2020.

Shell’s chief executive, Ben van Beurden, said Thursday that his company was seeking to increase its footprint in the Permian, the most recent sign that big oil companies will continue to snap up smaller ones.

“For Shell, the Permian is absolutely critical,” said Gretchen Watkins, president of Shell Oil. “The Permian is massive; it’s a game changer for U.S. shale. It is the powerhouse field.”

But the output of shale wells declines quickly, making the drilling here a never-ending treadmill. And that has been a challenge for the small companies that have been the innovators here but are now facing demands from investors to show financial discipline.

Typical of the smaller producers is Parsley Energy, one of the most active drillers in the basin with some of the most productive wells. Its share price was cut in half over the last two years as it outspent its cash flow grabbing land and ramping up production.

Technicians at work in a hydraulic fracturing operation at a Parsley Energy site. Parsley, a smaller producer, has been one of the most active drillers in the Permian, with some of the most productive wells.CreditTamir Kalifa for The New York Times 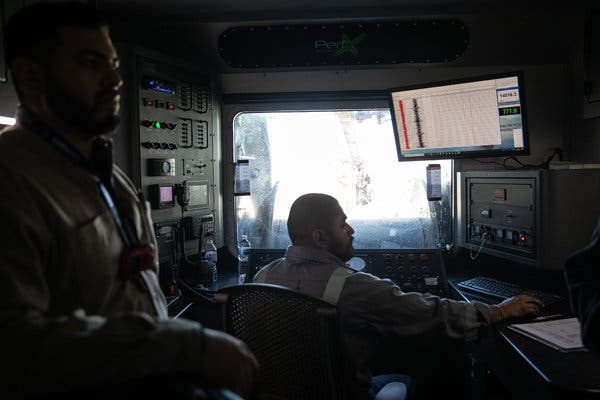 A worker waits as oil is transferred from production tanks to a tanker truck at a Parsley Energy facility. Because of last year’s decline in oil prices, Parsley is reducing spending on exploration and production this year by $300 million.CreditTamir Kalifa for The New York Times 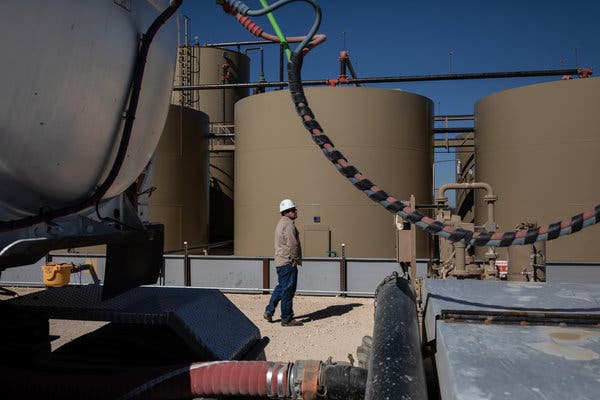 Late last year, as oil prices fell, Parsley changed course. It is reducing spending on exploration and production this year by $300 million. It decommissioned two of its 16 rigs late last year, and two more in January.

“We all have to be prepared,” said Matt Gallagher, Parsley’s chief executive, for a six-month slump in prices. “We’re one Twitter message away from a deal with Iran and $40 oil.”

The multinationals have the wherewithal to stick by their aggressive development plans and take a longer view.

They bring an arsenal of tools that the smaller companies lack. With their size and reach, they can make the best deals for equipment like drill rigs and fracking services. Many have their own pipelines, refineries and global trading personnel to sell their oil for the highest price.

In January, Chevron agreed to acquire a refinery in Pasadena, Tex., from the Brazilian company Petrobras for $350 million to refine more products coming from the Permian. The announcement came only days after Exxon Mobil announced a major expansion of its Beaumont, Tex., refinery to process more local crude.

The major companies also aim to cut production costs even further with increasingly sophisticated applications of artificial intelligence. Shell, for instance, has developed algorithms to replicate and standardize the most effective drilling and fracking methods worldwide.

“We are not here through one boom and bust,” said Amir Gerges, Shell’s Permian general manager. “We are here developing a generational resource.”

Report: Oil Industry Knew About Dangers of Climate Change in 1954

At elite gala with ex-Bush official, Obama implores Wall Street to thank him for making them so much money

The American Dream is Killing Us

A Green New Deal is Not Too Expensive, Doing Nothing Is

The World to Come