How the Rich Really Play, “Who Wants To Be An Ivy Leaguer?”

Daniel Golden investigated how the rich buy their children’s way into elite colleges reflects on the latest scandal—and remembers when affluent readers mistook his expose for a “how-to” guide.

My 2006 book, “The Price of Admission: How America’s Ruling Class Buys Its Way into Elite Colleges — and Who Gets Left Outside the Gates,” was intended as a work of investigative journalism.

But many of its more affluent readers embraced it as a “how to” guide. For years afterward, they inundated me with questions like, “How much do I have to donate to get my son (or daughter) into Harvard (or Yale, or Stanford)?” Some even offered me significant sums, which I declined, to serve as an admissions consultant.

They may have been motivated by a tale I told in the book about a youth whose admission to Harvard appears to have been cemented by a $2.5 million pledge from his wealthy developer father. The then-obscure Harvardian would later vault to prominence in public life; his name was Jared Kushner.

Those requests from people who misunderstood my aim in writing the book came back to mind on Tuesday when I heard about the latest and most brazen scandal involving upper-crust parents — including chief executives, real estate investors, a fashion designer and two prominent actresses — manipulating college admissions.

One would think that the rich and famous couldn’t care less than the rest of us about foisting their children on elite colleges. After all, their kids are likely to be financially secure no matter where, or if, they go to college. Yet they seem even more desperate — to the extent, according to a complaint, that dozens of well-heeled parents ponied up six or seven figures for bogus SAT scores and athletic profiles for their children to increase their chances at Yale, Stanford and other brand-name universities.

The parents “chose to corrupt and illegally manipulate the system,” Andrew Lelling, U.S. attorney for Massachusetts, said at a press conference Tuesday. “There can be no separate college admissions system for the wealthy.”

Perhaps these parents were pining to boast at Hollywood cocktail parties about their Ivy League imprimatur. Possibly their offspring, like those of many successful families, lacked the motivation to strive and excel academically, and without a substantial boost would have been consigned to colleges of lesser repute.

In any event, such allegedly criminal tactics represent the logical, if extreme, outgrowth of practices that have long been prevalent under the surface of college admissions, and that undermine the American credos of upward mobility and equal opportunity. Although top college administrators and admissions officials were apparently unaware of the deception, their institutions do bear some responsibility for developing and perpetuating the system that made it possible.

According to one poll after another, most Americans believe college admissions should be based on merit, rather than wealth or lineage. Through their own intelligence and hard work, students with the best grades, the highest test scores, the most compelling recommendations and other hard-earned credentials achieve a coveted ticket to higher education — and with it, enhanced prospects for career success and social status. So goes the legend perpetuated by elite colleges, anyway.

But decades of investigating college admissions have led me to conclude that, for rich and famous families, it’s more like a television game show, “Who Wants to Be an Ivy Leaguer?” complete with lifelines for those who might otherwise be rejected. Instead of phoning a friend or asking the audience, the wealthy benefit from advantages largely unavailable to middle-class and poor Americans — what I described in my book as “the preferences of privilege.”

The best-known and most widespread of those preferences is conferred on alumni children, known as “legacies,” who tend as a group to be disproportionately white and well-off. But rich applicants whose parents didn’t attend the target university, like Kushner, still have a leg up.

Rich candidates can enhance their standardized test scores with test-prep and tutoring. They don’t have to rely for college recommendations and advice on an overburdened public high school guidance counselor with a caseload of hundreds of students. Instead, their parents can afford a private counselor who discreetly advises the desired university that the family has a history of philanthropy and, in case of acceptance, would be inclined to be especially generous.

Similarly, inner-city schools often don’t field teams in patrician sports like crew, squash, fencing and the like. But prep and suburban schools do, giving their affluent students an opportunity for the significant edge given to recruited athletes, even in upper-class sports limited to a relative few. Colleges favor recruits in these sports at least partly for fundraising reasons; they’re important to wealthy alumni and donors who played them in college or enjoy them as leisure activities.

So the parents charged in the current case followed customary practices of the entitled: hiring a private counselor, getting test help and participating in a patrician sport. The difference is they allegedly took blatant short cuts: The counselor was unscrupulous, a stand-in secretly took the tests and the applicants didn’t actually play those sports. But, without the tilted system of preferences already in place, the parents would have had to choose a different route — or actually let merit determine their children’s college destiny. 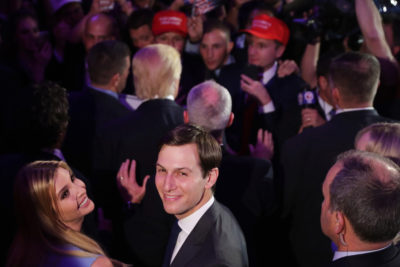 The Story Behind Jared Kushner’s Curious Acceptance Into Harvard

I began working through the list, poring over “Who’s Who in America” and Harvard class reunion reports for family information. Charles and Seryl Kushner were both on the committee. I had never heard of them, but their joint presence struck me as a sign Harvard’s fundraising machine held the couple in especially fond regard.

The clips show Charles Kushner’s empire encompassed 25,000 New Jersey apartments, along with extensive office, industrial and retail space, and undeveloped land. Unlike most of his fellow committee members, though, Kushner was not a Harvard man. He graduated from New York University. This eliminated the sentimental tug of the alma mater as a reason for him to give to Harvard, leaving another likely explanation: his children.

Sure enough, his sons Jared and Joshua both enrolled there.

Charles Kushner differed from his peers on the committee in another way; he had a criminal record. Five years after Jared entered Harvard, the elder Kushner pleaded guilty in 2004 to tax violations, illegal campaign donations, and retaliating against a witness.

As it happens, the prosecutor in the case was Chris Christie, ousted as the head of Trump’s transition team. Charles Kushner hired a prostitute to seduce his brother-in-law, who was cooperating with federal authorities. Kushner then had a videotape of the tryst sent to his sister. He was sentenced to two years in federal prison.

New Jersey real estate developer Charles Kushner pledged $2.5 million to Harvard University in 1998, not long before his son Jared was admitted to the prestigious Ivy League school. At the time, Harvard accepted about one of every nine applicants. (Nowadays, it only takes one out of twenty.)

Administrators at Jared’s high school described him as a less than stellar student and expressed dismay at Harvard’s decision:

“There is no way anybody in the administrative office of the school thought he would on the merits get into Harvard,” a former official at The Frisch School in Paramus, New Jersey, told me. “His GPA did not warrant it, his SAT scores did not warrant it. We thought for sure, there was no way this was going to happen.

Then, lo and behold, Jared was accepted. It was a little bit disappointing because there were at the time other kids we thought should really get in on the merits, and they did not.”

A sum of the minimum amounts Trump pledged or donated to Penn shows he donated $1,350,000 solely based on Penn’s annual giving reports.

At least one expert familiar with Trump’s history of charitable giving is skeptical about Trump’s pledges or donations to Penn.

“It would be closest to or perhaps the biggest one gift of his life if he followed through with his pledge to Penn,” said The Washington Post reporter David Fahrenthold, who spent months investigating Trump’s donations to charity.

Through his reporting, Fahrenthold identified $7.8 million in charitable giving from Trump’s personal wealth since the the 1980s. He also found numerous occasions when Trump would pledge a donation, but not follow through with it.

“The other two times he gave $1 million dollar gifts he made sure everyone knew it,” he said, noting a donation Trump made to a Manhattan Vietnam Veterans’ memorial in 1983 and a televised fundraiser for veterans in January of this year.

Yet, John H. Zeller, vice president for development and alumni relations, told the DP in an emailed statement that Penn “has an exceptionally high rate of fulfillment” for pledged gifts.

“A commitment (pledge) to annual giving is paid within the fiscal year it is made,” wrote Zeller, refusing to comment specifically on Trump’s donations.

There is also the possibility that Trump donated anonymously to Penn and chose not to be listed on annual giving reports.

“He loves to promote whatever he does,” Lloyd said. “If he would have made a major gift here he would insist that it go public.”

Donation to the Penn Club of New York

This string of donations Trump may have made in the late nineties roughly coincides with his children’s enrollment at Penn. Donald J. Trump Jr. began classes at Penn in 1996 and Ivanka Trump in 2000.

The donations also coincide with a gift Trump made to fund a project closer to home.

In 1996, the Wharton graduate donated over $100,000 to the Penn Club of New York, according to a Jan. 28, 1997 DP article. The Penn Club — founded in 1994 — is a private clubhouse in Midtown Manhattan for the use of Penn students, alumni, and faculty with membership.

A Penn Club administrative assistant (who declined to be named) confirmed Trump is listed as a “founder” of the Penn Club. The minimum gift to be considered a “founder” was $150,000, according to The Washington Post’s book “Trump Revealed.”

Other documents, including University reports and tax filings from the Trump foundation, show their father donated up to $1.4 million to the University.

These records show on top of sending several students to Penn, the Trump family made multiple donations to the University. Despite these contributions, Penn largely stayed reticent about their links to the family, particularly after the controversial election of President Trump.

In the 1980s and ’90s, Penn attempted to encourage larger donations from Trump, but it is still unclear whether this was successful.

A belief in meritocracy is not only false: it’s bad for you

The Narcissism of Capital

3 thoughts on “How Jarvanka Got In: Daddy Kushner and Daddy Trump Paid Millions to Ivy League Universities”