After almost two years, Mueller’s Russia investigation status can be confusing. Here’s an overview of the central question, and what we know.

WASHINGTON – Amid signs special counsel Robert Mueller’s investigation into Russian election interference may be near its conclusion, a new USA TODAY/Suffolk University Poll finds trust in Mueller eroded and half of Americans now agree with President Trump’s contention he has been the victim of a “witch hunt.”

Support for the House of Representatives to seriously consider impeaching the president has dropped since last October by 10 percentage points, to 28 percent.

Despite that, the survey shows a nation that remains skeptical of Trump’s honesty and deeply divided by his leadership. A 52 percent majority say they have little or no trust in the president’s denials his 2016 campaign colluded with Moscow in the election that put him in the Oval Office.

But that number does reflect an improvement from previous polls. One year ago, 57 percent had little or no trust in his denials; in December, 59 percent did.

What’s more, Trump’s relentless attacks on Mueller and his inquiry have taken a toll on the special counsel’s credibility. Now, 28 percent say they have a lot of trust in the former FBI director’s investigation to be fair and accurate. That’s the lowest level to date, and down five points since December.

In comparison, 30 percent express a lot of trust in Trump’s denials, the highest to date. 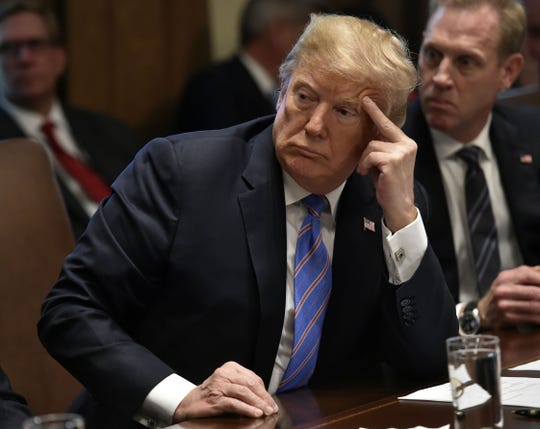 Mueller has indicted 34 people, including Russian intelligence operatives and some of Trump’s closest aides and advisers. The indictments have detailed the eagerness of the Trump campaign to benefit from a sophisticated Russian effort to influence the 2016 election, but have not accused the president’s aides of participating in that operation. Last week, Trump’s former campaign manager, Paul Manafort, was sentenced to a total of 7.5 years in federal prison for financial crimes filed by the special counsel’s office.

The poll’s findings set the stage for a ferocious partisan battle when Mueller submits his report to Attorney General William Barr, expected soon. The president’s cascade of criticism of those pursuing him succeeded in fortifying his support and raising questions about his investigators.

That campaign continued this weekend.

“What the Democrats have in trying to steal a Presidential Election, first at the ‘ballot box’ and then, after that failed, with the ‘Insurance Policy,’ is the biggest Scandal in the history of our Country!” Trump declared in a tweet he posted Sunday night.

On Friday, Trump tweeted that “there should be no” report from Mueller, who was appointed in May 2017 to investigate how Moscow tried to influence the presidential election and whether Team Trump cooperated with them.

“This was an illegal & conflicted investigation in search of a crime,” Trump wrote Sunday, adding in a follow-up tweet, “…..THIS SHOULD NEVER HAPPEN TO A PRESIDENT AGAIN!”

Fifty percent say they agree with Trump’s assertion that the special counsel’s investigation is a “witch hunt” and that he has been subjected to more investigations than previous presidents because of politics; 47 percent disagree. Just 3 percent don’t have an opinion.

Still, the president’s success in persuading fully half of the electorate that he’s been subjected to unprecedented scrutiny is notable, says David Paleologos, director of the Suffolk Political Research Center.

“Even among people who said they had ‘some’ trust in the Mueller investigation, half agreed with President Trump’s witch-hunt allegation,” he said.

What happens: When Special Counsel Robert Mueller delivers his report?

“Trump, he gets badgered every single day,” says Robert Lynch, 62, of Selden, New York, a Republican who describes himself as a “100 percent” supporter of the president. Mueller’s report is “going to say no collusion, absolutely none,” he predicts.

Annette Lantos Tillemann-Dick, 66, an innkeeper from Denver and a Democrat, disagrees, saying evidence of collusion by Trump’s campaign is already obvious. “You don’t need a report to see it. It’s in our face.”

Lynch and Tillemann-Dick were among those surveyed. The poll of 1,000 registered voters, taken by landline and cell phone Wednesday through Sunday, has a margin of error of plus or minus 3 percentage points.

“I hope that illegal collusion makes it very difficult for the Republicans to continue to defend undefendable behavior on the part of the person who is sitting in the chief executive’s office,” she says. “And I hope that it would lead to him being removed from office.” (Tillemann-Dick, who was called randomly in the survey, happens to be the daughter of the late California congressman Tom Lantos.)

A shift on impeachment

Support for impeaching Trump has cooled, the poll shows, in the wake of House Speaker Nancy Pelosi’s declaration  she opposes the idea unless there was bipartisan support for it. Among Democrats, 41 percent say Pelosi’s comments had some or a lot of impact on their opinion about impeachment, about equal to the 42 percent who say they had no impact.

Pelosi’s argument that trying to remove Trump from office would divide the nation apparently has also flipped the public’s expectations of what Congress will do. Last fall, the poll found that a 54 percent-32 percent majority said a new Democratic majority in the House was likely to seriously consider impeachment.

Now, by 46 percent-41 percent, those surveyed predict that the House won’t.

“If he doesn’t get impeached, it’s not like it’s going to be the end of the world because 2020 is not super-far away,” says Calvin Crawford, 18, a political independent and a senior at University High School in Spokane, Washington, who was polled. “I think Trump is probably going to lose if a candidate comes out and starts to propose things that people actually want.”

Gloria Davy, 65, a Democrat from Tucson, says it would bring her “great joy” for Democrats to push for impeachment. But she also worries about the upheaval that could follow.

“I can’t imagine what would happen to the stock market,” the Arizona retiree said. “So it’s probably best not to impeach him and to just have him run for his second term and lose. That would be the safest thing for our economy.”

She is eager to see Mueller’s report. “I’ll read it cover to cover,” she says.

As Mueller’s probe winds down, the debate over what to do about the confidential report he is required to submit to the Justice Department is heating up. Last Thursday, the House unanimously passed a resolution calling for public release of the report, but South Carolina Republican Lindsey Graham blocked passage of the nonbinding measure in the Senate.

The poll finds overwhelming and bipartisan support for releasing the report, whatever it finds. In all, 82 percent say it is important to them that the report be made public; 62 percent call that “very important.”

What happens after: Mueller delivers his report? Congress braces for battles 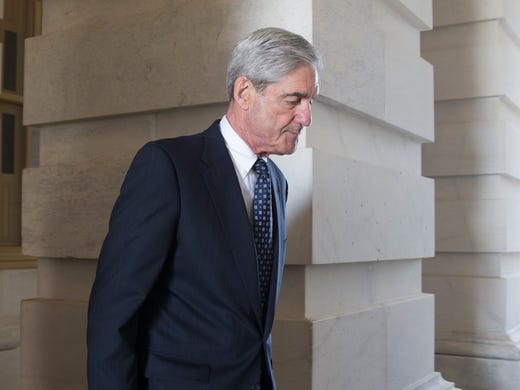 Ten Things Which Would Convince Me It’s Not A Witchunt

Assessments of Mueller have become less positive and more partisan during his investigation. In June 2017, before he had brought any indictments or won any convictions, 30 percent viewed him favorably and 16 percent unfavorably, a net positive rating of 14 points. Twenty percent had never heard of him and another 33 percent weren’t sure what they thought.

Few Americans seem to expect the conclusion of the special counsel’s investigation is going to settle the controversies surrounding the president.

For one thing, House committees now controlled by Democrats launched a series of inquiries into Trump, his administration, his business practices and his family.  Views of those probes are narrowly divided: 49 percent say Democrats are doing the right thing by pursuing the investigations aggressively; 46 percent say they are going too far.

“Now we’re going after Ivanka, so there will be more and more and more,” said Davy, the Democrat from Arizona, “and he can’t veto it.”

Lynch, the avid Trump supporter from Long Island, says Mueller’s report will clear Trump and should recommend another investigation to follow into his 2016 opponent. “It should say, ‘Okay, now we’re going after Hillary.'”

One thought on “Poll: Half of Americans say Trump is victim of a ‘witch hunt’ as trust in Mueller erodes”