“In order to connect to what was before,” says Christopher Juul,” you have to disconnect from what is now.”

Conjuring the primal wildness of the Viking era and Northern European Bronze Age, the trio blends the cinematic clang of human bones, reconstructed swords, and frame drums with brooding lyrics borrowed and re-contextualized from rune stones, amulets, and other ancient artifacts.

Over Juul’s percussive soundscapes, Faust bellows like a Tibetan monk raised on death metal — a darkness balanced out by Franz’s soothing coo, which draws on her years of studying traditional Norwegian techniques. The end product is “amplified history” — a genre of their own design.

“We try to give a spark of emotion: to make people feel how it is to be surrounded by nature, to slaughter their own cattle, to build their own drum, to live from the Earth,” Faust says. “Every attempt to connect it to modern stuff that makes us sad is not important.”

Heilung, which translates to “Healing” in German, is defined by disconnecting from the artificial barriers of modern life, be it religion, class or politics, and tapping into a more universal tribal spirit.

Growing up, all three musicians were magnetically drawn to their local “living history” Viking reenactments, in which participants dressed in authentic clothing, took part in period-specific pastimes, and discovered a deeper sense of community and spirituality.

“As a teenager, I believed I was the ugliest person on the planet, and it destroyed me for a long time,” Franz says. “I didn’t feel like I could connect to people around me.”

“Everything changed when I was 11 and found the Viking reenactment in my hometown. I figured out I could play a drum, I could shoot a bow and arrow, I could make clothes. I felt empowered by this.

You make friends and sit around the bonfire with people 10 years older than you, exchanging life stories. A beautiful place to grow up, and it saved me. Even today, I’ve had three wise old ladies look at my hand and say, ‘Oh, I can see something happened when you were 11.’ I don’t know how much I believe in that kind of stuff, but I do think it’s peculiar.” 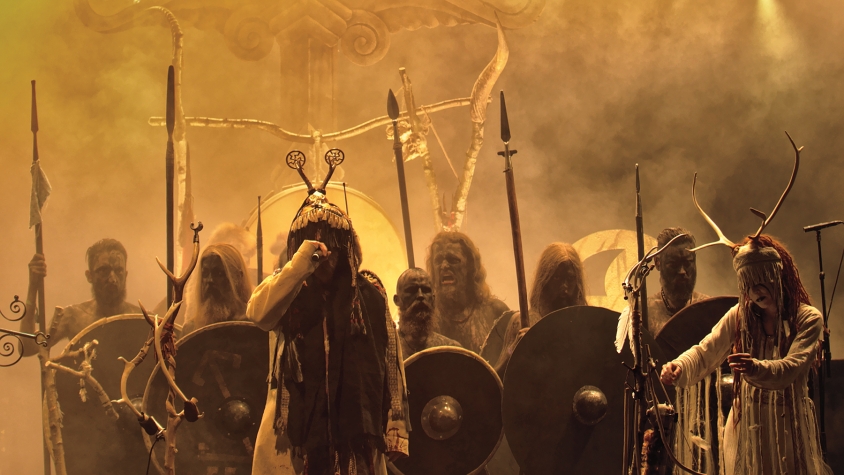 Kai Uwe Faust (center) performing with Heilung at Castlefest, Lisse, The Netherlands, 2017 photograph by Kees Stravers
Discovering Viking culture saved Faust’s life in a more dramatic way. He grew up in a strict Christian household, where his parents outlawed TV but encouraged him to explore literature.
“One of my earliest childhood memories is reading a book called The Last Secrets of Our Planet,” he says.
“It contained all these unsolved archeological mysteries and pictures of graves and everything. This was before I could even read. I can’t define it, but I had a huge fascination with it. My grandfather had a book of Greek mythology, which he shouldn’t have had as a good Christian. And when I read that at a very small age, that also fascinated me.”

But his idyllic childhood in the German countryside evolved into troubled teen years when he rebelled against organized religion. “I thought that very dominant thing in my and my parents’ life, the Christianity, was all bullshit, and I was not shy to express it,” he continues. “In school, I had to go through a lot of tests, and there was always trouble, violence — I was kicking stuff, hitting people. They made me take an intelligence test, and it turned out, ‘The boy is over-average smart but just doesn’t want to participate in school.’ I dove into Satanism, but a little more than regular teenagers went. I did blood offerings. I tattooed an upside-down cross on myself at the age of 14.”

But the “light returned” around age 17, as he delved into shamanism and Viking culture. “I made peace with my parents again and officially apologized,” he adds. “Since then, I’ve had an explosion of creativity.” One crucial turning point was discovering Tibetan throat singing. “It’s darker than heavy metal,” he says. “I heard stuff like Sepultura and Slayer, and I could tell they were onto something. They sent me on a search for the primal source of what they triggered inside me. The Tibetan throat singers go so deep — deeper than any metal singer I’ve ever heard. At the same time, they also have this whistle. That’s the sound I was looking for.”

Faust’s musical awakening also intersected with his passion for tattooing, part of a wider Neo-Nordic movement that emphasizes ornate designs featuring deer, warriors and ancient symbols. Juul, who’d operated his own recording studio, Lava, in Copenhagen since 2003, admired Faust’s visual work, so they struck a deal: The tattoo artist offered his friend some free ink in exchange for help recording some poems. Thus, Heilung was born. (“I still haven’t gotten any tattoos,” Juul admits. “It would be too many now, I think.”) Juul and Faust spent two or three months in the studio, carving out a unique sonic design that even they didn’t exactly understand at first.

“When we were making the sounds, it was like, ‘This is never going to happen,'” Juul says. “‘You’d have to be crazy to listen to something like this.’ We were counting on one weird person somewhere.” Recruiting Franz, Juul’s longtime girlfriend and former bandmate in experimental electronic band Euzen, brought a more melodic, ethereal layer to the project. “I remember coming home one day and hearing something weird,” she says. “I came closer, and I saw Kai standing in our garden, half-naked and screaming. I said, ‘What the fuck have you guys been cooking up together?'”

As a trio, they wound up crafting 2015’s Ofnir, a 73-minute opus that defies easy categorization. (Experimental folk metal? Doom-tronica? The beauty is not knowing.) But they took a massive career leap with their first (and second overall) show at the 2017 installment of the Netherlands medieval/fantasy festival Castlefest, performing in front of 10,000 people. The event was as much a theater piece or “living history” as concert — with everyone, including a quartet of extra musicians, decked out in the authentic regalia of their respective cultures (including antlers, human hair and bones).

“What puzzled me about the process is that we didn’t actually plan anything in detail at all,” Franz admits of the concert, which was filmed for YouTube (receiving nearly 1 million views) and recorded for their 2017 live LP, LIFA. “We found ourselves in the practice room, and we had two days in the venue. We were like, ‘OK, we’re going live in three days. We have two days to get this show working.’ And we put up the track, and everything meshed together. On the second day, we had a costume test, and none of us really knew how the other people were going to look because we didn’t plan it. We just said, ‘Put on something that makes you feel real or connected to yourself. Don’t make something you think looks cool.'”

Onstage, Heilung’s transformation was complete. They chanted, stomped and pounded drums painted with their own blood, as the transfixed audience periodically rose to a deafening roar. “We were all standing there,” Franz recalls with awe, “and it was like, ‘Look at us. My god, we’re a tribe!'”