[reads from Goldstein’s book]“In accordance to the principles of doublethink, it does not matter if the war is not real, or when it is, that victory is not possible. The war is not meant to be won. It is meant to be continuous. The essential act of modern warfare is the destruction of the produce of human labour. A hierarchical society is only possible on the basis of poverty and ignorance. In principle, the war effort is always planned to keep society on the brink of starvation. The war is waged by the ruling group against its own subjects, and its object is not victory over Eurasia or Eastasia, but to keep the very structure of society intact.”

[notices Julia is asleep] Julia? Are you awake? There is truth, and there is untruth. To be in a minority of one doesn’t make you mad. Julia, my love, I understand how, but I don’t understand why.”

When it comes to starting wars, we don’t even bother to change the script anymore 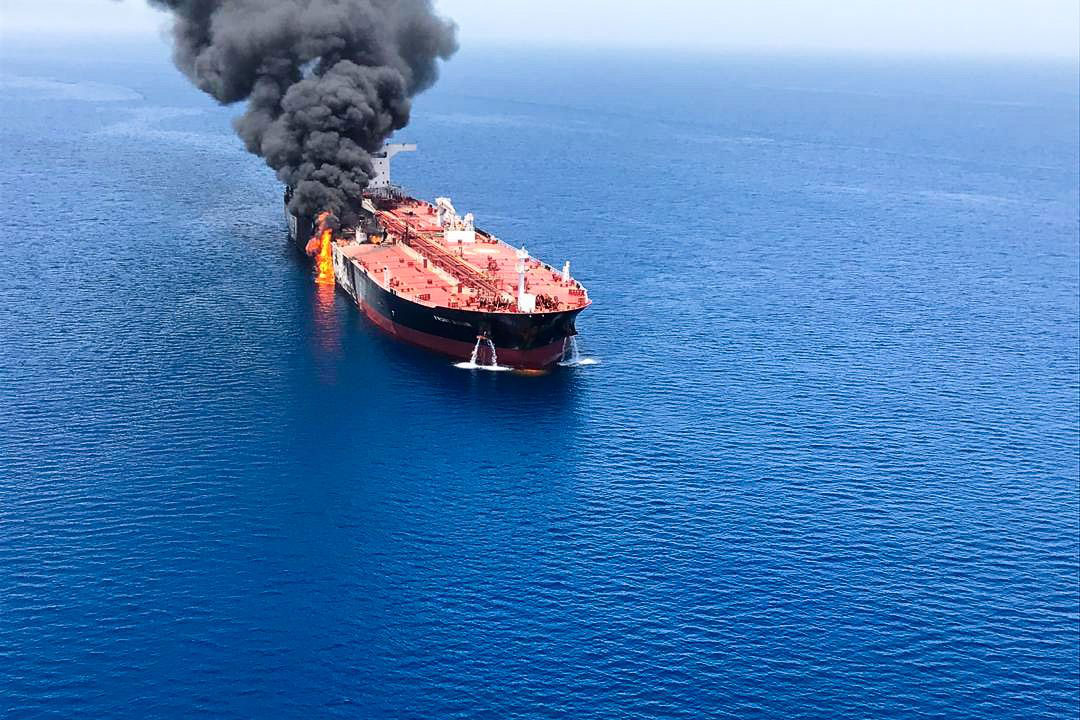 Here we go again. Iran has not only shot down an American spy drone over the Strait of Hormuz, but refuses to feel bad about it.

Iran’s General Hossein Salami — one assumes this is a real person — said of the drone downing, “We are completely ready for the war. Today’s incident is a clear sign of this accurate message.”

We all know what this means. This aggression will not stand, man.

Depending on who’s doing the counting, the United States has attempted to overthrow foreign governments roughly 72 times since World War II. The script is often the same, and the Iran drama is following it. Go back through history and you’ll often see these elements:

A FARAWAY STATE COMMITS AN ACT OF “AGGRESSION”

In August of 1964, Lyndon Johnson told the American people that North Vietnamese, in an “outrage,” fired at the USS Maddox and two destroyers in “open aggression on the high seas.” Explaining that “our response, for the present, will be limited and fitting,” LBJ assured us that “firmness in the right is indispensable today for peace.”

We now know there was no second torpedo attack by the North Vietnamese. Cables suggested the U.S. was returning fire because an “overeager sonarman… was hearing ship’s own propeller beat.”

A year later, Johnson himself would say, “For all I know, our Navy was shooting at whales out there.”

The Iranian “aggression” case is another murky high-seas drama. It was reported that recent damage to a pair of oil tankers in the Gulf of Oman bore “a striking resemblance” to the signature of “devices in Iran’s arsenal.” The initialNew York Times story about the damage to tankers in May suggested a link to photos taken of missiles loaded into small boats by “Iranian paramilitary forces.”

In neither of these news stories was it mentioned that the tankers in question weren’t American (of the four hit so far, one was Norwegian, one Japanese, and two Saudi). Still, the United States released black-and-white images purporting to show Iranian Revolutionary Guards trying to remove an unexploded mine from the hull of the Japanese ship, i.e. to hide the evidence.

Sometimes the “aggression” is more real than in others (Saddam Hussein invading Kuwait is a little different from a “sketchy” late-night firefight in Panama), but the result is usually the same. It somehow never strikes Americans as odd, however, that the “aggression” takes place in or around a faraway country with no ability to attack the territorial United States.

The American military is always portrayed as being in a defensive posture, even when it’s many thousands of miles from home, on or even inside the border of another sovereign state. Would we consider ourselves aggressors if we shot down an Iranian drone in Cape Cod Bay? We’ve become so used to these stories, they no longer strike us as odd.

INTELLIGENCE TELLS US THERE IS IMMINENT THREAT OF MORE AGGRESSION

In early May, anonymous American officials said there were “multiple threat streams” from Iran and U.S. forces might be in danger in Iraq, Syria, Kuwait, and other places. This triggered a decision to deploy a carrier group and other forces to the Middle East.

It goes without saying that we’ve seen this one before, most infamously in the case of the Iraq invasion, a caper Trump National Security Adviser John Bolton had a hand in. In the second Iraq war, there were intelligence leaks of everything from mysterious uranium purchases to meetings between Iraqis and 9/11 bombers.

There were air strikes in Iraq and Syria in 2014 after the U.S. gathered “information on specific, concrete plotting” by the Khorasan terrorist group, and Reagan in 1983 even went on TV to tell America that the airport in Grenada could be used by Soviet long range bombers, and that Cubans there had enough ammo there to supply “thousands of terrorists.”

Some Democrats in this case are saying people like Bolton (who’s wanted war with Iran since his first mustache) and Mike Pompeo are trying to “twist the intel” to make it seem like Iran is bent for war. Connecticut’s Chris Murphy tweeted, “that’s not what the intel says.” Such complaints from the opposing party are not unusual:

THE MINORITY PARTY COMPLAINS CONGRESS HAS NOT BEEN CONSULTED

This has been a running theme with both parties since 2001 especially, when the United States passed the Authorization for Military Force Against Terrorists (AUMF). When Republicans are in power, Democrats complain they haven’t been consulted about the use of force, as they did following an increased troop deployment to Iraq in 2007 (Joe Biden even said this was an impeachable offense).

Now, with Iran, multiple Democrats are doing the same dance, arguing the AUMF couldn’t apply to a conflict with that country. In a lot of these cases, lawmakers in question aren’t actually opposing military action, they’re just saying the president should ask them before they do it. The transparently political nature of these protestations makes it difficult to sort out when members of congress genuinely have reservations about imminent military conflict (as they actually might in the Iran case).

THE FOREIGN AGGRESSOR IS FOUND IN VIOLATION OF INTERNATIONAL LAW

This is often true! Sometimes, however, it isn’t. The pretext for invasion of Iraq was a supposed violation of a United Nations Security Council resolution requiring disarmament. You might remember Colin Powell saying Iraq was in “material breach.”

Iran has just announced that 10 days from now, it will be in breach of international agreements on its permitted levels of enriched uranium. Added to the intelligence about the tanker “attacks” and warnings of “multiple threat streams,” the political justification for invasion will be there. Precedent suggests Trump could just use the AUMF again to attack Iran because, why not? We’ve been doing that all over the Middle East for nearly two decades.

The “violation of international law” argument would probably carry more weight if it weren’t also true that basically every American military action in the last half-century has been considered illegal under international law by someone. This is a conclusion that’s been reached about the 2003 invasion of Iraq, the NATO bombing of Kosovo, the entire U.S. drone assassination program, the coalition bombing of Libya, and other campaigns.

Trump’s decision to exit the Obama-era nuclear deal may have led to increased belligerence by the Iranians, or it may not have. Did we send spy drones toward Iran to be shot down because we no longer have the access we might have had under the Obama deal, or because we’ve been spying on Iran with drones anyway, for a while now.

Iran even built a “copy” of an RQ-170 Sentinel drone the Iranian cyber warfare captured and landed in 2011.

The bizarre consolation in all of this is Trump himself doesn’t appear thrilled with the idea of going to war with Iran. When Iran shot down the drone, Trump said it was “hard to believe it was intentional” and might have been done by someone who was “loose and stupid,” despite the aforementioned General Salami saying Iran was “ready for war” after it happened. This is an area where we actually want to encourage the all-hat-no-cattle side of our president.

The seeming ambivalence of Trump while the likes of Bolton and Mike Pompeo burn through the same old invasion-pretext script presents a powerful case that this is just how the American state operates, irrespective of who sits in the White House.

What we end up calling “aggression” abroad is often more like resistance to our plans to control a region. Sometimes the “aggressor” is genuinely behaving badly, and sometimes not, but for decades we’ve been lightning-quick to opt for military solutions to almost any crisis, for increasingly obvious reasons.

The politicians running the United States often owe their careers to military contractors. Their children typically don’t fight in wars. The mayhem, death, and environmental catastrophe that result from modern war never occur in their home states. It long ago became too easy to make this decision, and we’re on the brink of making it again. At least with Iraq we pretended to argue.

Iran isn’t Iraq, Serbia, Panama, or an airstrip in Grenada. This country has real military strike-back capabilities that the backwater states we’re used to invading simply do not, meaning war would present a far heightened danger not only to our troops but to civilians in the region. All our recent wars have been stupid, but this one would be really stupid.

Just once, could we not do this? Does the script always have to end the same way?

How Many Times Do I Have to Explain This?