“The main problem in Europe and for the whole Western world is we are in a deep spiritual crisis and nobody as yet has discovered it. If you want to understand what’s going on in the world today, you need to have a spiritual dimension. You cannot understand only from a political point of view for the time being. We are not just in a huge political struggle but a spiritual one.”

Over the past century of popular culture, Satan acquired the souls of delta blues musicians, incited youth rebellions, possessed small children and goats, impregnated unsuspecting women, and transmitted evil through backwards lyrics on heavy metal records. To paraphrase the Rolling Stones, but what’s puzzling us is the nature of his game.

The forces ostensibly aligned against Satan become so objectionable, he no longer looks like the bad guy. They include such groups as the Westboro Baptist Church, notorious for its hate speech against homosexual people, Jews, Muslims, and other groups, all of which it condemns as “satanic frauds.”

There’s Donald Trump (who is either the Anti-Christ, Cyrus, or Queen Esther depending on whom you ask) and his cabinet of anti-science nutters, in league with the US religious right, which aggressively pushes anti-abortion and anti-gay legislation, not to mention engaging in overt bigotry. These forces also include the 20,000 people who recently signed an online petition condemning the Amazon TV adaptation of the novel Good Omens – about a demon and an angel – as “another step to make satanism appear normal.”

Now, a documentary threatens to rehabilitate Satan. Directed by Penny Lane, Hail Satan? follows the early adventures of the Satanic Temple, an institution that hit upon the perfect counter-strategy to Evangelicals’ efforts to recouple church and state.

Based in Salem, Massachusetts (where else?), the Satanic Temple is officially recognised as a tax-exempt religious organisation. As such, it claims the same rights and privileges as those obtained by evangelical Christian groups, albeit with a prankster sensibility.

Where the city council of Phoenix, Arizona, began its meetings with a Christian prayer, for example, the Satanic Temple demanded that satanic prayers should also be said. The council chose to drop the prayers altogether. When the Child Evangelism Fellowship set up the pro-Christian Good News clubs in US public schools, the Satanic Temple introduced its own After School Satan clubs – promoting scientific rationalism. And when the Oklahoma state capitol permitted the installation of a Ten Commandments sculpture in its grounds, the Satanic Temple campaigned to erect its own 8ft-high statue of Baphomet, the goat-headed, cloven-hoofed deity.

“It became very apparent there is a real need for what we are doing,” says Lucien Greaves, the Satanic Temple’s spokesman and de-facto leader. “More and more, they try to whittle away the rights of others and define us as a Christian nation, to the extent religious liberty applies to them alone. That’s just a scary circumstance for us to be in.”

Greaves is exactly what you would expect the earthly ambassador of Satan to look like. Pale-skinned, well-groomed, and dressed entirely in black, and with one clouded eye, he could have walked off the set of a teen vampire series. Harvard-educated, he often sounds as if he is reading from an academic text.

There is no mention of “God” in the US Constitution, he points out, but there is the First Amendment protecting freedom of expression and religion (including the right to apostasy). The words “under God” were added to the US pledge of allegiance in 1954, and “In God we trust” first printed on US currency in 1956 so as to differentiate the US from the godless communists. “Up to that point, it had been E pluribus unum – ‘from many, one’ – which was a much better motto.”

Greaves doesn’t believe in God, Satan, “evil” or anything supernatural, he says. Nor does he sacrifice babies or serve a secret coven. The Satanic Temple is nontheistic, and its principles are broadly liberal humanism. The first of its seven tenets, for example, is: “One should strive to act with compassion and empathy towards all creatures in accordance with reason.”

So why call it “Satanism?”

“The metaphor of Satan is just as important to a lot of us as it would be to anybody who takes it literally because we grew up in a Judaeo-Christian culture. It really does speak to us in a very pointed and poignant way about our place in our culture and what our affirmative values are … and, of course, it defines what we oppose: these kinds of theocratic norms and authoritarian structures.”

The Satanic Temple’s interpretation is closer to Milton’s Satan in Paradise Lost, Greaves says. “The rebel against tyranny, who stands in stark contrast to that mindless superstition and that mob mentality that causes people to give themselves the moral self-licensing to create the ‘other’… and thereby victimise people.”

Paradise Lost: A Shift in Narrative Language After the Fall

You could say this is in keeping with Satan’s place in pop culture. Only occasionally is he taken as a literal figure of evil; more often, the devil represents the outsider, the provocateur, the one with the best tunes. To be labelled “the devil’s music,” as jazz, blues and rock’n’roll all are, is the best possible branding. The Rolling Stones express their Sympathy and called an album Their Satanic Majesties Request, but nobody considers them serious Satanists. Led Zeppelin’s Jimmy Page is more qualified; he inserted mystical symbols into the band’s imagery, owned an occult bookshop in London, and was a keen collector of the works. 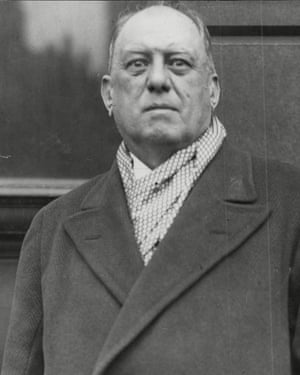 He even bought the Scottish home of the occultist Aleister Crowley (whose face also appears on the cover of the Beatles’ Sgt Pepper album). Page collaborated with the film-maker Kenneth Anger, whose films of the era, such as Lucifer Rising and Invocation of My Demon Brother, brought together a Who’s Who of ’60s occult-dabblers, including Page, Mick Jagger, Donald Cammell, the Manson family member Bobby Beausoleil, Anton LaVey, and Marianne Faithfull.

LaVey is generally acknowledged as the founder of modern Satanism, although he, too, was more theatrical showman than genuine prince of darkness. He strove to look the part, with his shaved head, sharp little goatee and black cloak – imagery largely gleaned from old horror movies. He opened the First Church of Satan in San Francisco in 1966, synthesising various occult sources into a semi-coherent philosophy, and attracting a few celebrity devotees, including Jayne Mansfield.

Greaves acknowledges the Church of Satan as an influence, but rejects LaVey’s beliefs in social Darwinism and police-state authoritarianism as “Ayn Rand with ceremonial trappings.”

The heavy metal acts of the 1970s and ’80s caused more alarm in some quarters, from Black Sabbath and Coven onwards through the likes of Slayer, AC/DC, Iron Maiden and onwards to thrash, death, and ultimately black metal. Again, the Satanic messaging is largely theatrical: occult symbolism, demonic lyrics, and horror-movie guitar riffs.

The exception was the infamous Norwegian black metal scene, which devolved into genuine horror with the bands Burzum and Mayhem, whose horrific saga involved church-burnings, suicide, and murder.

“A lot of these movements have an inordinate amount of attention for how small they really are,” says Greaves. “Sometimes, they embrace the worst elements of what they are accused of. They become this creation of the hysteria against satanism.” 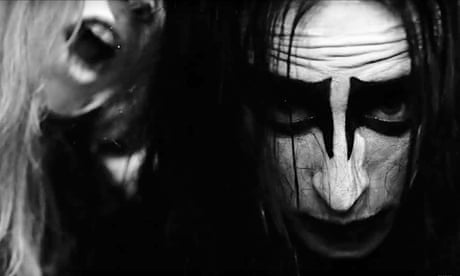 ‘Before you know it, it’s not a big deal to kill a man’: Norwegian black metal’s murderous past

Hysteria rose to witch-hunt levels in the 1980s and ’90s, in what became known as the “Satanic panic.” Doubtless inflamed by the imagery of horror movies – such as The Exorcist and Rosemary’s Baby – Christian groups began finding “evidence” of Satanism everywhere. They heard subliminal satanic messages in rock records, the most famous being Led Zeppelin’s Stairway to Heaven, which supposeably contains the phrase, “Here’s to my sweet Satan,” when played backwards.

Then came lurid allegations of satanic ritual abuse around the world: child sexual abuse, murder, torture, cannibalism, and gory rituals all ostensibly at the behest of a secret sect intent on undermining the foundations of civilisation.

This is the environment in which Greaves grew up. “I saw peoples’ lives destroyed by the mere attribution of Satanism,” he says. “I began to realise the real evil is in the witch-hunt itself, and not in any of these alleged cults who are supposed to be initiating these activities.”

Pizzagate and the Satanic NASA Pedophile Slave Colony on Mars

While Satanist conspiracy theories fill the airwaves, it bears remembering there really is an organised sect sexually abusing children on a global scale with impunity:

The Catholic church is still making excuses for paedophilia

Things have hardly improved in recent years, Greaves admits. Despite being led by a serial sinner, the Trump regime is on a concerted mission to reinsert conservative Christian values into US public life. This legislative assault, known as “Project Blitz”, is coordinated and well-funded.

“We’re obviously on the defensive now,” says Greaves, “and it’s a frightening state of affairs in the US when you have a clearly deranged theocrat like Mike Pence as vice-president and a buffoon like Trump in office, and they’re willing to pander to their evangelical nationalist base.”

The release of Hail Satan? is a blessing and a curse for the Satanic Temple. It should bring new members and much-needed revenue to the cause (the church’s only income is direct donations and merchandise sales), but it also puts Greaves in the limelight, possibly even the crosshairs. Towards the end of Hail Satan? we see him appearing at a satanist rally in Little Rock, Arkansas, next to the notorious Baphomet statue. Before he steps out, he puts on a bulletproof jacket. 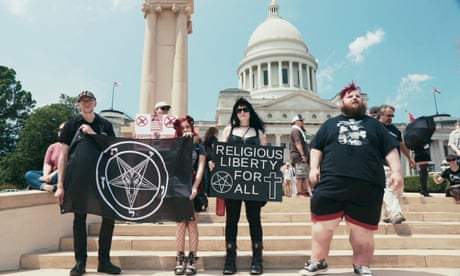 Hail Satan?: the film that will change your mind about satanism

Greaves remembers the rally well. “What you don’t see,” he says, “is when I was walking up to the podium, there were a bunch of people with guns loitering about, and they wanted me to know they were there. I ended up speaking with my back to them, which was rather harrowing. I’m kind of puzzled as to why nobody took a shot, but that was a very clear possibility.”

He regularly receives death threats from the Ku Klux Klan as well other neo-Nazi and Christian White supremacy groups. Greaves is more concerned for his country’s future than his own. “We’re at the precipice of a new dark age,” he says ominously. Rather than ushering it in, these “Satanists” are trying to stop it.

One thought on “Our Deep Spiritual Crisis: Are Satanists Now the “Good Guys” in the Fight Against Evangelical Right-Wing Extremists?”