‘After All Man’s Defenses Had Failed, Slain
By the Humblest Thing Put Upon This Earth’

In Orson Welles’ radio broadcast of H.G. Wells’ science fiction fantasy, War of the Worlds, all the military spending and preparedness by the United States could not defend the American people from the invaders from Mars. In the end what killed the superior intruders was not arms, but a microscopic organism against which the Martians’ immune system had no defense.

“Suddenly, my eyes were attracted to the immense flock of black birds that hovered directly below me. They circled to the ground, and there before my eyes, stark and silent, lay the Martians, with the hungry birds pecking and tearing brown shreds of flesh from their dead bodies.

Later when their bodies were examined in the laboratories, it was found that they were killed by the putrefactive and disease bacteria against which their systems were unprepared. . . slain, after all man’s defenses had failed, by the humblest thing that God in His wisdom put upon this earth.”

In an eerily similar way, the greatest military ever assembled on earth has been useless to defend America from the potential collapse of its society, and its empire.

Donald Trump, at his daily press conferences, repeatedly says no one would expect such a thing could ever occur.  Except that government studies predicted just such a thing.

“Nobody in their wildest dreams would have thought we would need tens of thousands of ventilators,” Trump said.  But the Pentagon’s wildest dreams of 11 aircraft carriers, 65 attack submarines, 65 destroyers, 104 B-1 bombers, 744 B-52 bombers, 8,848 M1 Abrams tanks, 6,724 Bradley Fighting Vehicles and 1,018 F-16 fighter jets have for years come true.

The U.S. can afford to build the greatest arsenal ever known to fight two major wars at once while scrambling to produce hospital gowns, surgical masks and hand sanitizer.  All of America’s mighty “defenses” could not defend the nation against the humblest of things put upon the earth.

The United States prepared for the wrong war.

A trillion dollars a year is spent on the military and nuclear weapons when America has no real armed enemies.  Instead the U.S. is an enemy to nations that seek to impede its dominance by protecting their own sovereign interests.

There would be virtually no public support for this spending if the American people understood the U.S. as an offensive force.  So the targets of its dominance must be portrayed at every turn as the menace. When Russia, for instance, defends its interests in Ukraine or on its borders against NATO troop deployments, the aggressive U.S. role is cloaked by government and the media, while the Russian response is branded a threat. 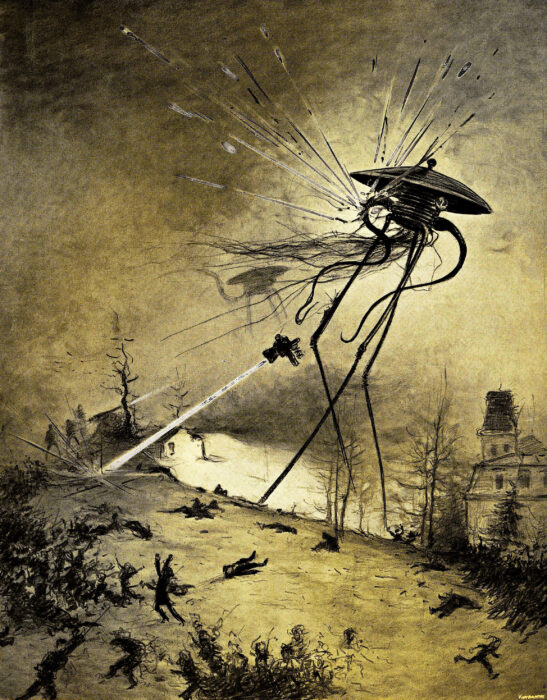 While the U.S. has spent trillions unnecessarily on an offensive military machine against nonexistent threats, it failed to prepare for the real threat to itself, the same threat that brought down the mighty Martians.

There were several dress rehearsals for the coronavirus. The SARS outbreak from 2002 to 2004 infected 8,000 people and killed 774 worldwide–numbers that seem underwhelming in the middle of this crisis. But at the time it was not certain how far it would spread.

In 2009 the H1N1 or Swine Flu killed as many as 575,400 people worldwide.  It infected 60 million Americans, killing 14,000 before it was contained. Two bullets were dodged. But instead of using those close calls to prepare for the next bullet–which could be historic–taxpayers’ money continued to be poured into military “preparedness” instead.

The New York Times reported on Thursday the Trump administration had run an exercise last year to test America’s preparedness for a pandemic.

“Code-named ‘Crimson Contagion’ and imagining an influenza pandemic, [it] was simulated by the Trump administration’s Department of Health and Human Services in a series of exercises that ran from last January to August. The simulation’s sobering results — contained in a draft report dated October 2019 that has not previously been reported — drove home just how underfunded, underprepared and uncoordinated the federal government would be for a life-or-death battle with a virus for which no treatment existed. …

Three times over the past four years the U.S. government, across two administrations, had grappled in depth with what a pandemic would look like, identifying likely shortcomings …”

Trump repeatedly complains, “We inherited, we, meaning this administration, an obsolete broken system that wasn’t meant for anything like this.” But his administration did nothing to prepare for a potential pandemic despite last year’s eight month study.

His proposed budget on Feb. 10 called for a nearly 10 percent cut to Health and Human Services. This was when Trump was irresponsibly downplaying the coronavirus threat, which was in full swing in China at the time.

Other Western governments have also proved to be unprepared for the virus. Europe has seen cutbacks to its nationalized health services, especially in Britain, France and Italy, and had no contingency plan in place to create capacity in the event of a pandemic.

Now the U.S. and Europe are scrambling to turn auto plants into ventilator factories;underwear manufacturers into surgical masks plants and liquor companies into makers of hand sanitizers. They are playing catchup, racing against time, desperately trying to respond to the real war they were always facing.