When he was winning primaries, many in the Democratic Party degraded the Vermont senator and his supporters. Now, he’s a friend, chess-playing companion, “American original” in his Sheepdog role for the party.

Presidential Candidate Bernie Sanders: Sheepdogging for Hillary and the Democrats in 2016

It did not take much for Joe Biden to distinguish himself from his main rival for the Democratic nomination.

“If the Democrats want a nominee who’s a Democrat, a lifelong Democrat, a proud Democrat, an Obama-Biden Democrat, a New Democrat,” he thundered triumphantly after his momentum-turning victory in South Carolina in February, “then join us!”

New Democrats, also known as centrist Democrats, Clinton Democrats, or conservative Democrats, are a moderate ideological faction within the Democratic Party in the United States. As the Third Way faction of the party, they support   politically-correct  cultural liberalism, economic neoliberalism, fiscal conservatism, and identity-politics-based social liberalism. New Democrats dominate the party for the last four decades from the late-1980s through 2020.

Who Are the New Democrats?

But that is not stopping the party from trying to make him feel welcome and utilize his services as a Sheepdog, herding left-wing voters back into the party’s all-inclusive corral — now that it has stopped him from being its leader.

Bernie Sanders is Not a Socialist… so is he a Sheepdog?

When Mr. Sanders dropped out of the presidential race a week ago, a Democratic establishment that has long kept him at arm’s length raced to publicly embrace him. Since he endorsed Mr. Biden, the former vice president, on Monday, party leaders have lavished Mr. Sanders with praise.

“Bernie is an American original, a man who has devoted his life to giving voice to working people’s hopes, dreams and frustrations,” former President Barack Obama said plainly in a video on Tuesday that announced his support for Mr. Biden. Never mind that Mr. Biden had spent part of the Democratic primary race accusing Mr. Sanders of disloyalty for considering a primary challenge against Mr. Obama in 2012.

A day earlier, Mr. Biden called Mr. Sanders the “most powerful voice for a fair and more just America,” then theatrically acquiesced to Mr. Sanders’s quip that they play chess. A former top aide to Hillary Clinton enthused Mr. Sanders is selfless.

Bernie Sanders’ Policies are Mainstream, Normal, and Popular No Matter How Often He’s Called a “Socialist”

This rush to show appreciation for Mr. Sanders, an independent senator from Vermont who has spent much of his political career railing against the Democratic establishment, is partly an exhalation of relief.

In 2016, Mr. Sanders stayed in an increasingly bitter Democratic presidential primary race even after it became clear that Mrs. Clinton, the former secretary of state and first lady, would be the nominee. Some of his supporters, viewing the race as rigged, pledged their allegiance to him and vowed never to support Mrs. Clinton. Some voted for President Trump.

With Mr. Sanders’ recent unity-building activities, fears that he would inspire the sort of divisiveness that many in the party still blame for the election of Mr. Trump have been momentarily assuaged.

It is also a recognition Mr. Sanders moved the party to the left, introducing policies like “Medicare for all” and tuition-free public college now embroidered into the fabric of the party.

But perhaps, above all, it is a projection of how desperate Democrats are to beat Mr. Trump. Establishment Democrats recognize that if Mr. Biden is to win in November, he will need the backing of Mr. Sanders’ loyal supporters, some of whom have expressed reluctance, if not disgust, at the notion of voting for the former vice president. By showing Mr. Sanders gratitude, they are hoping to mollify his supporters, too.

On Wednesday, Mr. Sanders’ campaign manager, Faiz Shakir, was circumspect about the establishment’s newfound respect for his boss.

“He’s a person who has unrivaled integrity among many politicians,” he said. “When the dust settles, people recognize that integrity.”

Mr. Sanders, who is 78, said this week in an interview with The Associated Press that it was “probably a very fair assumption” that this presidential campaign was his last. But Mr. Shakir has rejected the idea that Mr. Sanders is guided by a wish to cement a positive political legacy in the eyes of a party he has long loathed.

“That’s not the way he thinks,” he said. “He does not think on legacy terms.”

For months, Mr. Sanders said he would do everything he could to support the eventual Democratic nominee. “I hope it’s me,” he would say, before quickly committing to work with whomever it was to defeat Mr. Trump. 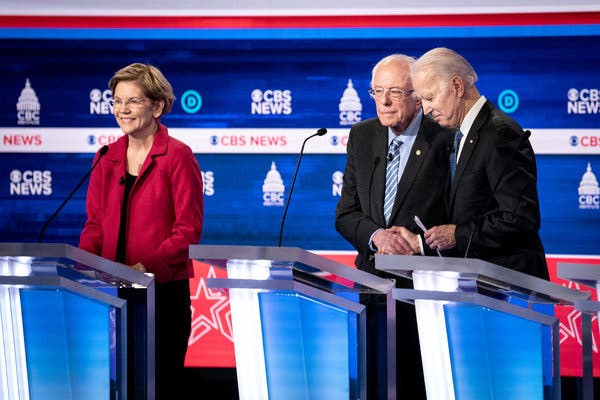